As we move into the colder months in Ohio, the seasonality of our food is beginning to shift. One popular produce item that we can see throughout the different seasons is squash, which comes in over 100 varieties!

These varieties are separated into two categories, depending on the season they’re harvested: summer and winter. You may be wondering, what is the difference between summer and winter squash, and why is it called winter if squash can’t grow then? Wondering how to store your winter squash? FoodPrint has a few tips for both whole and cut winter squash storage. 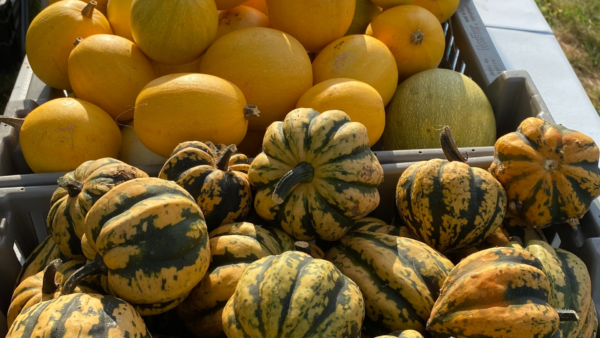 Outside of these immediate characteristics, it’s good to know that both summer and winter squash are from the same plant family, Cucurbita. This means both ripen on the vine and there are a few differences to note here as well. As a vining plant, winter squash grows (vines) in a specific direction, allowing you to grow it away from other plants and maximize your grow space. In contrast, summer squash tends to grow in bushes, which, while showy and picturesque, take up a bit more space in your garden.

Winter squash is only considered tasty once it has matured, whereas summer squash is considered to be best when harvested young. Neither winter nor summer squash can tolerate freezing temperatures though, and it’s recommended that they be planted 2-3 weeks after the last frost in your area.-

As mentioned before, there are over 100 varieties of squash, both winter and summer, that can be grown and harvested here in the U.S. The most popular varieties you may find at your local farmers’ market include:

Looking for chance to expand your squash knowledge? Consider visiting our first indoor market of the season at Old Trail School for the Squash Showcase Saturday, November 5 from 9am to 12pm!